Fellow Labomembers! It is time to celebrate yet another victory! The Laboratory has successfully added the Netherlands to its field of operations. Operation Nithertheodisk was a success. As the executor of this operation, I am fulfilling my duty to report on it today.

We started this operation on Saturday the 25th of August. In the morning, we snuck into the Netherlands using a harmless looking family car from the closest nearby town on our side of the border. This way we looked like harmless citizens from the town right across the border, just wanting to shop for cheap stuff in the Netherlands. 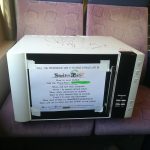 PhoneWave on the way to Eindhoven

Using the Dutch railways, I travelled to Eindhoven in a timely and comfortable manner. The trains there seem to be on time, compared to the railways I use every day. Having arrived in Eindhoven, I took the bus to Veldhoven.The organization must have manipulated the construction plans of the doors of the Dutch railway’s Intercity train’s seating compartments. It was incredibly hard to use their small doors when you need to carry a PhoneWave simultaneously. Getting into the Intercity train itself was okay though. However, seeing their busses, I realized, that the train must have transported my body into a future, where you can pay for your bus tickets with credit cards.
/chuunibyou off
However, people were still looking suspiciously at my glorious PhoneWave. At the convention, people were quite curious about why I was carrying this heavy boi around. On that Saturday, I was wearing my Itaru Hashida (Daru) cosplay (Steins;Gate 0 Version). I wanted to create a gadget that would come as close to the original PhoneWave as possible with my restricted financial resources. So I built this microwave as a special cosplay prop/gadget which I can take to conventions to entertain the attendees with it’s functions by making them available to the public. It’s the first time travel machine used in the original Steins;Gate and (in the series) can be used to send text messages into the past. So I took a broken microwave, removed the heating functions, and built my own circuits to replicate the remote control function of the Steins;Gate microwave. Later on, I added another feature on top of that, the feature of sending E-Mails with a timestamp from the past. I will explain this a bit later in this article. The main features can be powered with a USB power bank. Just the lightbulb and the motor for the plate inside can’t be powered by it.

However, let’s talk about my experience at my first Dutch anime convention, Abunai 2018.

The location, the NH Koningshof Conference Centre, is located on the outskirts of Veldhoven. Veldhoven is right next to Eindhoven. The location and its surroundings are beautiful. The conference centre is surrounded by forest. This makes the location quite relaxing. The inside oft he conference centre can be quite a labyrinth.
If you go to a Dutch convention, you need to know that people will approach you in dutch. If you tell them you can’t speak Dutch, they will happily talk to you in English 🙂
However, the language used in the panels vary. Sometimes they use English, sometimes they use Dutch. I saw videos of the Abunai Cosplay Dating Show 2013 on YouTube, and it was hosted in English. When I went to see the Cosplay Dating Show this year, it was hosted in dutch only. I was quite sad about that since I was really looking forward to that show since the YouTube videos of it were so funny and in English. A lovely lady I met at Abunai tried her best to translate it for me. But because the loudspeakers were too loud, it was really hard to understand her. Even though I learned a bit of Dutch in university, it didn’t help that much in understanding the Cosplay Dating Show. Judging by the reactions of the crowd, the show must have been amazing. The “Your Anime Sucks!” and “Traveling to Japan” panel, for example, were hosted in English. The “Your Anime Sucks!” panel has even been live-streamed via twitch, which made it possible for me to watch the last hour of it at home. Unfortunately, it was the last time this panel has been held. It was amusing nevertheless.

I have met a couple Labomem’s at Abunai as well! I met a Steins;Gate 0 Okabe, a labcoat Kurisu, a Maid Kurisu, and our soon-to-be Fubuki (she is part of our Connichi Steins;Gate 0 cosplay group)
However, noone (except of me) actually tested the PhoneWave’s function on the convention. This may have been caused by the german phone number assigned to the microwave since calling a german number costs more for the average Dutch person than calling a Dutch phone number. And usually the PhoneWave’s territory is Germany 😀 (Except if it’s on livestream) 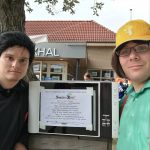 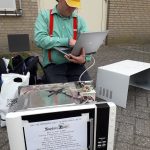 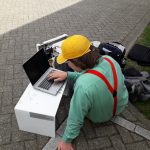 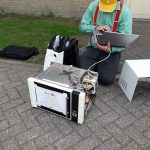 Daru setting up the PhoneWave @ Abunai 2018

The latest upgrade of the PhoneWave

As you may have seen on the photos above, the microwave can now be used to alter timestamps in e-mails going through my e-mail server. This way I can make it look like an e-mail sent to or sent from my e-mail-server was sent into the past. The timer value you set up in the call is being sent to my e-mail-server when you press # to achieve that. The e-mail-server then subtracts an hour for each second you typed into the PhoneWave from all the e-mail’s timestamps of the e-mails that it processes after the timer has been started. It does so until the timer reaches 0 on the microwave. This upgrade is already included and described in my How To build the PhoneWave article.

This website uses cookies to improve your experience while you navigate through the website. Out of these, the cookies that are categorized as necessary are stored on your browser as they are essential for the working of basic functionalities of the website. We also use third-party cookies that help us analyze and understand how you use this website. These cookies will be stored in your browser only with your consent. You also have the option to opt-out of these cookies. But opting out of some of these cookies may affect your browsing experience.
Necessary Always Enabled
Necessary cookies are absolutely essential for the website to function properly. This category only includes cookies that ensures basic functionalities and security features of the website. These cookies do not store any personal information.
Non-necessary
Any cookies that may not be particularly necessary for the website to function and is used specifically to collect user personal data via analytics, ads, other embedded contents are termed as non-necessary cookies. It is mandatory to procure user consent prior to running these cookies on your website.
SAVE & ACCEPT
To change your privacy setting, e.g. granting or withdrawing consent, click here: Settings